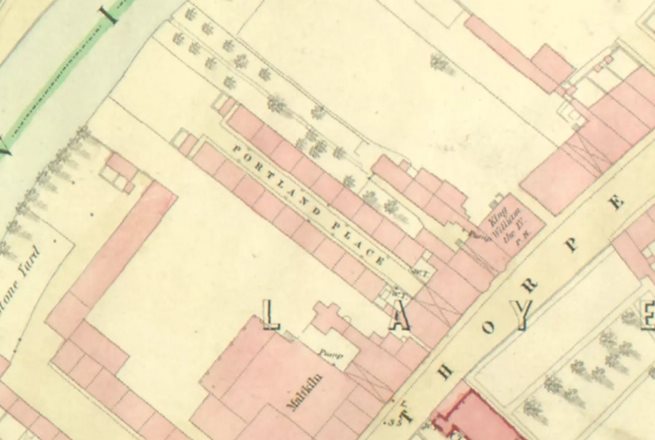 Though it appears to have disappeared off the map by the mid 20th century, Portland Place, off Layerthorpe, is prominent in the 1852 map of the Layerthorpe area. Mike Kettlewell’s ancestors lived there. Thanks to Mike for completing the questionnaire and providing this information:

Portland Place was accessed via a passage on the main Layerthorpe Road and was the 3rd yard on the left hand side, walking from Layerthorpe Bridge (John Bull Yard and Chickory Yard being the 1st and 2nd respectively, in 1909).

Mike’s ancestors lived at number 10, from around October 1904 to about September 1909. The house was rented, owned by George Rawling. Mike writes:

10 Portland Place was built in 1849. It was a 3 roomed house situated at the bottom of the yard, on the right hand side: beyond it was a wall which seperated it from the shallow river bank.