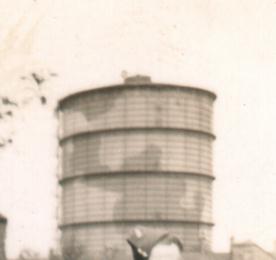 This photo shows the camouflage paint applied to the gasometer in the Layerthorpe area during the Second World War. (The Foss Islands chimney was similarly camouflaged.)

… on the sidewall of our house there was machine gun bullet holes were they been trying to blow the gastanks up. Our shop was an airaid shelter and my great granddad, who lived with us at no6, refused to get out of bed when the window was blown in on him. thats layerthorpe grit.
— Sheila Blakelock, comment on ‘Lost Layerthorpe’, www.yorkstories.co.uk

Sandra Wreglesworth’s father remembered that time too. Dennis Joseph Durkin was stationed on the gasometer on the night of the Baedeker raid in April 1942, as a 17 year-old volunteer in the Home Guard.

“Me and my friend were up the top of the gasometer with binoculars looking for lights so we could report them to the black-out wardens.”

“On that night my target was the gasometer”

— Willi Schludecker, on his visit to York 65 years later, reported in The Press.

Stephen’s memories of that night in April 1942

The bombed church of St Martin’s, Coney St, now serving as ‘a shrine of remembrance for all who died in the two world wars, a chapel of peace and reconciliation between nations and between men’.

To link to this page's proper location please use the > permalink.